The Town of Sackville, New Brunswick prides itself on their proximity to Tantramar marshes, the Bay of Fundy and the suite of nature-based recreational opportunities available. A University town, the community has a self-described cosmopolitan, artistic and pedestrian-friendly vibe.

EOS Eco-Energy has been active in Sackville and the surrounding Memramcook-Tantramar region for more than 15 years.  Focused on promoting renewable energy, sustainable development and climate change action, EOS’ focus on community-based solutions has ingrained them in the fabric of the town.

Building on years of climate change adaptation and green infrastructure efforts, EOS undertook the first depaving project in the Tantramar Region in the spring of  2019. Optimally located next to the Sackville Farmers Market in Bill Johnstone Memorial Park, the project involved depaving a 335 sq ft parking area and laying down a permeable pavement layer.  The permeable asphalt and its base layers allow rainwater to pass through to the soil below, unlike traditional asphalt which directs water to storm drains.

The project not only addressed a significant draining problem in the parking lot, but also raised public awareness of and desire for green infrastructure solutions in the community. 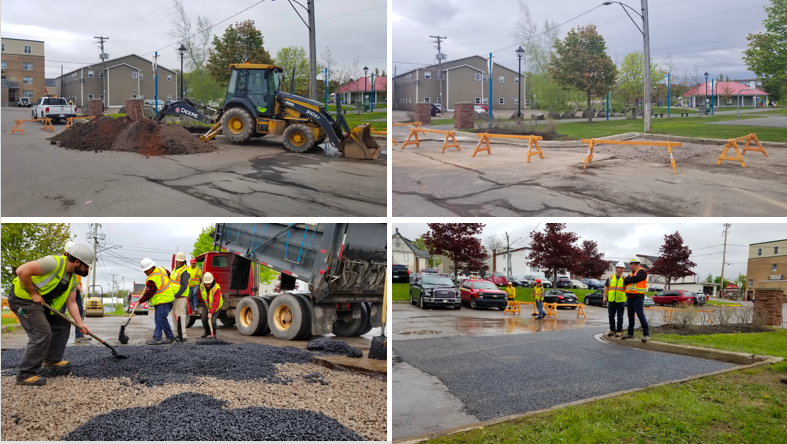 EOS’ work on the town’s first depaving site began long before the first shovel broke ground.  In the spring, they held a Community-Based Social Marketing workshop to develop approaches to build community support and influence social norms around green infrastructure. Specifically, they developed green infrastructure pledges for community members to take, in which they shared how they’re using their rainwater as a resource, or commit to how they’re going to implement changes in the future. This led to a much bigger impact as pledges were shared on social media, and even picked up and promoted by the provincial government.

The Town of Sackville was a willing partner on the depaving, having worked with EOS on past green infrastructure projects, including rain gardens. This partnership was critical to the project, as the Town not only helped to secure the ideal depaving site, but also helped with site preparation and have agreed to take on the long-term upkeep of the site. 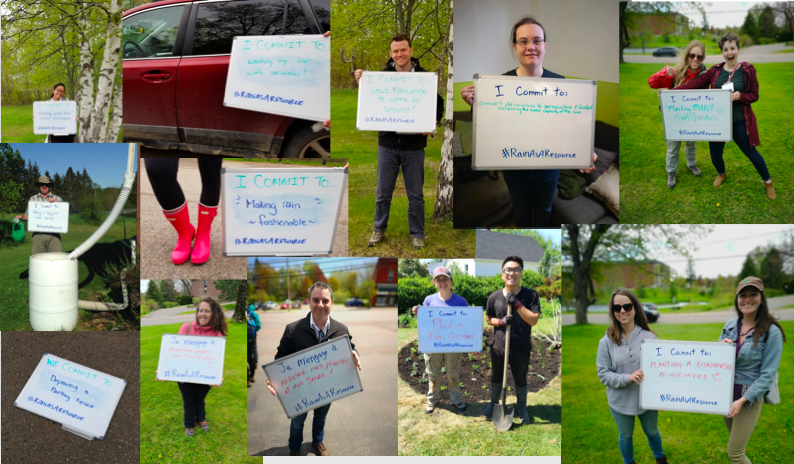 The site chosen for this first depaving project was critical to its success. Located next to the Sackville Farmers Market, the site received a high volume of foot traffic. Curious passersby would stop on their way to the market, read the information signage, check out the demonstration site, and learn about permeable paving and green infrastructure. EOS was also able to put up a booth shortly after the site installation to further engage market-goers.

Many people learned about the depaving project from the media. Thanks to concerted and strategic media outreach efforts, EOS’ work was picked up by local news outlets as well as CBC New Brunswick. This significantly extended the reach of their work, and they’ve since had inquiries from across the country, including from people in Manitoba, Ontario, and Newfoundland.

In the months since the depaving project was completed, EOS’ has received many inquiries from residents interested in learning more about managing their rainwater. Many have inquired about installing rain barrels on their own properties, so EOS is planning for more bulk purchases and DIY workshops in the future to address that need. They will also be continuing their rain garden program with residential homes, moving beyond the initial focus on schools and businesses.

The Town is looking to possibly install more depaving sites around the city, and Mount Allison University has expressed a similar interest. EOS also has plans to install 10 more rain gardens in downtown Sackville to reduce flooding during summer 2020.

Longer term success for this work would be noticeable behaviour changes among the community, local municipalities and businesses, including depaving their driveways and parking lots and replacing them with permeable pavers or other green infrastructure solutions. EOS has already seen strong indications of this trend taking hold, with residents signing pledges and asking for resources, and growing media attention.